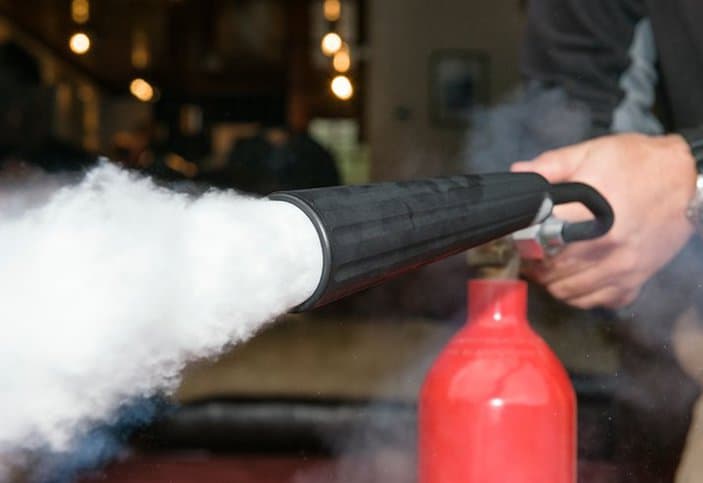 A grill fire inside Rays Food Place in Sisters last night was rapidly extinguished before spreading thanks to quick action by employees on scene, and a rapid response by Sisters-Camp Sherman Fire District.  All customers had evacuated the store and employees inside the store used fire extinguishers to stop the fire from spreading while firefighters responded.  First arriving units found an indoor gas grill covered with baking sheets with significant heat, but no visible flames.  Firefighters used a thermal imaging camera to confirm no heat in the ceiling tiles surrounding the hood of the grill, and damage was confined to the grill itself.

Shift Commander Rob Harrison said “The prompt effort of employees to locate and turn the gas to the grill off, and use a fire extinguisher to put the fire out helped to keep the fire from spreading.”    The National Fire Protection Agency (NFPA) offers the following safety tips in regards to use of a fire extinguisher:

Use a portable fire extinguisher when the fire is confined to a small area, such as a wastebasket, and is not growing; everyone has exited the building; the fire department has been called or is being called; and the room is not filled with smoke.

To operate a fire extinguisher, remember the word PASS:

For the home, select a multi-purpose extinguisher (can be used on all types of home fires) that is large enough to put out a small fire, but not so heavy as to be difficult to handle.

Choose a fire extinguisher that carries the label of an independent testing laboratory.

Read the instructions that come with the fire extinguisher and become familiar with its parts and operation before a fire breaks out.

Install fire extinguishers close to an exit and keep your back to a clear exit when you use the device so you can make an easy escape if the fire cannot be controlled. If the room fills with smoke, leave immediately.

Know when to go. Fire extinguishers are one element of a fire response plan, but the primary element is safe escape. Every household should have a home fire escape plan and working smoke alarms.