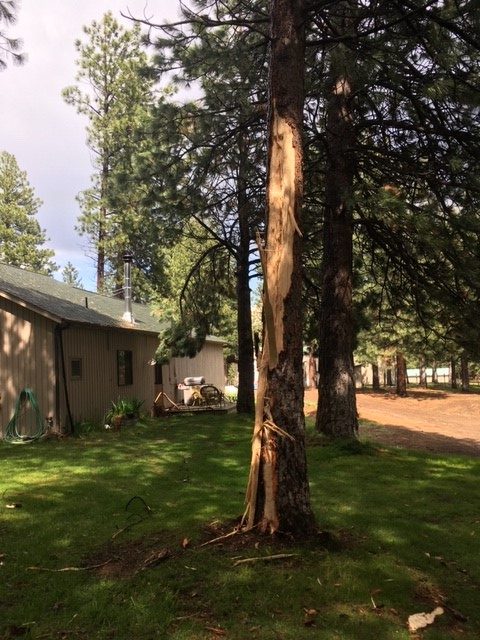 The first incident was reported at 2:54 p.m. when a homeowner on Peterson Burn Road reported a smoke odor in the main house on her property.  A second structure on the property, an Airbnb that was occupied by renters at the time, also reported a direct strike to their structure, that reportedly knocked everything off the walls.

Initial arriving units found two structures with obvious damage to both homes due to lightning discharge, but no active fire.  The main home had damage to gutters, roofing and wiring damage, while the Airbnb structure had darkening/charring to the corner of the home with wiring damage as well.  Three large pine trees on the property also sustained damage from a lightning strike removing bark and large areas of live woody material.

The second incident, just a short time later was reported when the homeowner on E Coyote Springs Road called 911 after lightning struck their home.  No smoke or flames were visible to arriving units and damage to this structure was limited to the front entry roof and structural beams.

Sisters-Camp Sherman Fire District responded with seven firefighters and three emergency vehicles to the first incident and one unit and four firefighters to the second incident.  Due to no active fire at either incident, the responding units performed investigation on each property looking for hot spots with a thermal imaging camera, and advised homeowners/residents to be aware of any suspicious odors, or electrical problems.

The Sisters-Camp Sherman Fire District reminds you that there is no safe place outside when thunderstorms are in the area. If you hear thunder, you are likely within striking distance of the storm. Just remember, When Thunder Roars, Go Indoors!