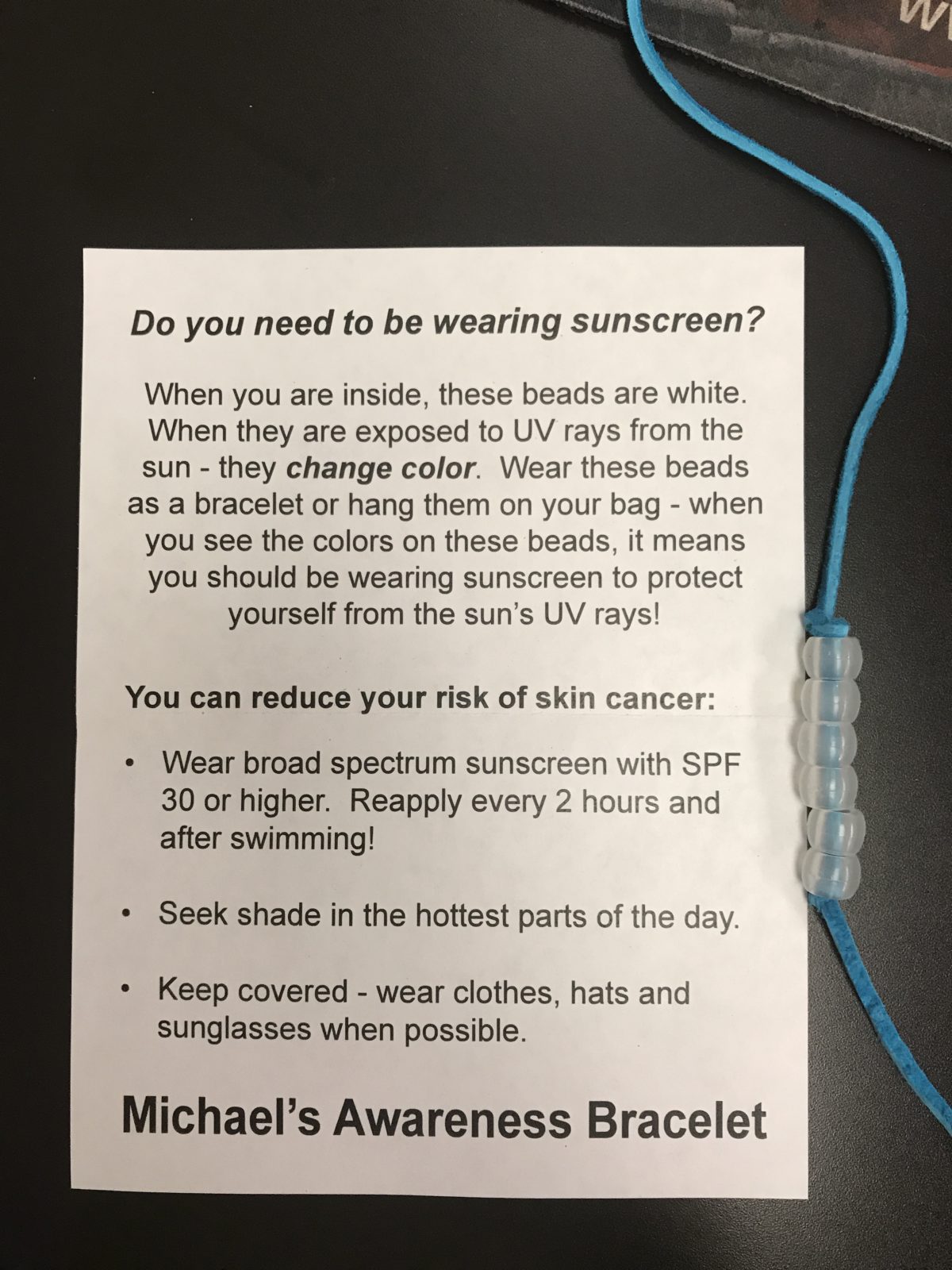 The “Michael’s Awareness Bracelet” is made with suede string and UV beads.  The beads are white when you’re inside and when they are exposed to UV rays from the sun; they change from semi-clear to bright colorful beads.  The purpose of the bracelet is to get your attention and remind you of the importance of putting on sun protection.  The solar beads were donated by Karen McLaughlin and the suede string was purchased through donations to the Fire District Association’s Michael McLaughlin fund.

The idea for the project came when hospital volunteers were giving out plastic bags filled with a bracelet, a small bottle of sunscreen and a note about protecting yourself from sun damage while Michael was at St. Charles Cancer Treatment Center for one of his radiation treatments.  Michael brought a few of the bags home and said that he’d really like to get this type of sunscreen awareness out to the kids in the Sisters Community through the Fire District.  His plan was to work on the project while he was going through treatment.  Unfortunately, the treatment Michael was going through drained his energy and made him too sick to see the project through before he passed away.  His wife Karen and Association President Angel Thorsvold got together, came up with a plan, coordinated a work party and it all came together.

Fire District volunteers plan to give the bracelets to each child attending area schools, including: Sisters Elementary, Sisters Christian Academy and Black Butte School at their end of the year Spray the Kids Event.  This is an annual event where Sisters-Camp Sherman and Cloverdale Fire Departments attend the field day on the last day of school and use water from a fire truck to make a large, wide water stream for school kids to run through to mark the end of the school year.

Michael’s wife Karen said, “Through the coordinated effort of the Sisters firefighter community, Michael got his wish to bring awareness to the youngest, the importance of skin protection.”

Karen also wanted to thank the Sisters community, friends and family for donating over $3,000 to her fundraiser for “Reach the Beach”.  This is the American Lung Association’s second largest national fundraising event.  It is for an annual road cycling event starting in Portland and finishing at Pacific City.  Karen and Michael had done this race several times before.  Karen said, “Michael told me when he was going through his toughest treatment that if he survived this cancer he was going to volunteer to help the sick.  I can’t help but feel that through the donations made in his honor and the American Lung Association Cause, that he got his wish, to help the sick!”